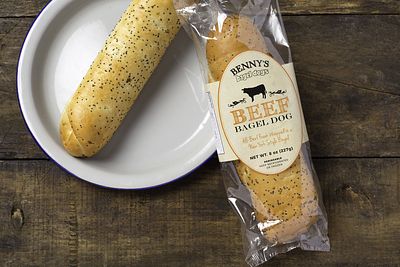 
Benny's Jumbo Bagel Dogs are an authentic delicatessen offering, a hearty all beef frank wrapped in a New York style bagel. Save in the freezer and treat yourself to a quick, delicious meal or a filling grab for lunch!


What started out as a little Piroshki shop in San Francisco’s Richmond District in 1956, became the Galant Food Company adored by our customers today. Unless you could smell the aroma, and follow your nose to our front door, just about anyone might have walked right by us. Our little factory on Potrero Street quickly became San Francisco's best kept secret. Since moving to our 10,000 square foot facility in San Leandro in 2012, we have expanded our distribution and manufacturing capabilities. Galant Food Co. has grown its product offerings to include organic and conventional wraps, calzones, entrees, and salads. Galant Food Co. remains very much a family affair sixty years later.