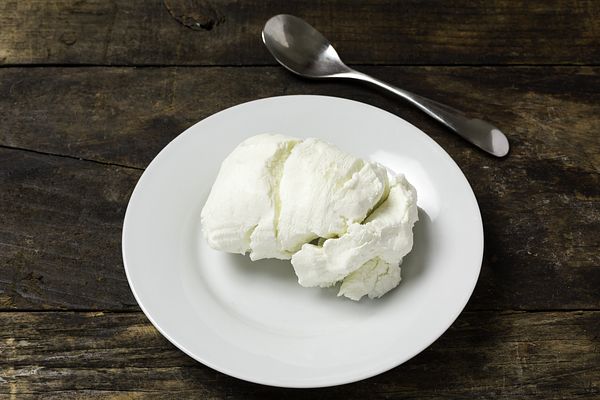 
Creamy and fluffy, Chabis is a pillow of fresh goat cheese. Chabis is now available in five varieties - Original, Herbs, 4-Peppercorn, Dill or our new Chabis Garlic - making it our most versatile offering.

Chabis retains more moisture than our regular Logs, which make them ideal for spreading or creating tasty dips. They also can be presented on a cheese board with crudités and crostini. Chabis is a great ingredient for appetizer, salad, pasta and even dessert. Enjoy Chabis with a dry rosé from California or a Rhone Valley red.


Cultured pasteurized goat milk, dried herbs or mixed crushed peppercorns or dill or garlic puree (depending on the flavor), salt and microbial enzymes. All Laura Chenel’s cheeses are made with fresh local milk that is pasteurized and we use only vegetarian approved rennet (no animal rennet).

After spending ten years working and studying in Europe, New York and the San Francisco Bay Area, Laura Chenel returned home to Sonoma County, undecided about her life’s direction. She was eager to return to the land so that she could be self-sufficient. As she was particularly concerned about eating and cooking healthy, natural foods, and having always been intrigued by goats, she decided to buy her first goats. As the herd continued to grow, Laura Chenel became attached to them. As the quantity of milk increased, she felt responsible for the milk and wanted to transform it into something that would pay tribute to its makers; therefore she found herself drawn into cheesemaking.

1979 - Learning To Make Goat Cheese Laura Chenel’s first attempt to make cheese and yogurt was not satisfactory, as her knowledge of goat milk cheese making was limited. In 1979, she decided to travel to France in hopes of discovering the secret of making tasty goat cheese. While living with four French farmstead families, she learned the right cheesemaking methods. Back home, she combined her knowledge gleaned in France with her creativity to achieve her own cheesemaking style. Soon she was producing and selling her first little cheeses.

One of her very first customers was the legendary Chef Alice Waters, owner of Chez Panisse restaurant in Berkeley, CA. Alice Waters fell in love with Laura’s cheeses, and decided to place a standing order for the restaurant (50 pounds a week). At Chez Panisse, Alice breaded and baked sliced Laura Chenel chèvre (French name for “goat”) and nestled it in beds of mesclun greens, thus creating the iconic “California Goat Cheese Salad.” Thanks to this relationship, Laura Chenel blossomed into the world of food service. With the demand soaring, Laura Chenel moved to a Santa Rosa creamery in 1981, and sold her herd to focus on high-quality cheese-making.

1983 - Expressing Her Creativity In Goat Cheesemaking

While Laura Chenel’s product line started with her original fresh goat cheese log, she has been inspired by her French experience, and decided to create surface-ripened cheeses: Crottin and Taupiniere were born. She was also influenced by the local cheese trend in early 80s coming from Italian immigrants, and therefore developed another one of her signature cheeses with famous cheesemaker Ignazio Vella: the Tome. Similar to a Pecorino Romano, this dense, hard cheese aged at least twelve-months has a rich, buttery, nutty flavor, and has met with success since its inception.

By the mid 1990’s, Chenel’s company was selling more than two million pounds of cheese a year. Her products’ popularity continued to grow incredibly. In 1993, she was ready for expansion into a larger, improved facility, located at the old Clover Stornetta dairy building in Sonoma. She started to introduce her cheeses to retailers through specific formats, such as Chabis, a pillow-shaped fresh goat cheese. Her business now at a more professional stage, combined with the new facility, allowed Laura to reconnect with her passion of having her own goat herd.

With the turn of the twenty-first century, the business continued along its upward swing and Laura’s standards for excellence never wavered. Always proud of her cheese, she decided after almost 30 years of running her company, to hand the business over to someone that completely shared her values and obsession for quality. It was a natural decision for her to sell her company to the French Triballat family (Rians), who has been making the best artisan goat cheeses in France for four generations. The Laura Chenel’s philosophy and products have remained the same since Rians has taken over, honoring the heritage of artisanal and local cheesemaking. Laura remained in charge of her herd of 500 goats, their milk supplying the goat cheese that still bears her name.

Always focused on artisan quality cheese and continuous improvement, we at Laura Chenel’s decided to build a brand new creamery to handcraft our beautiful chèvres. Located in Sonoma, the new facility respects our values as well as our constant search for high quality products and sustainability. Our creamery has been designed to reduce the use of natural resources (water efficiency, solar energy production, natural lighting, waste management). We’ve pioneered energy efficient technologies in our Sonoma creamery in order to ensure the quality of our cheese, as well as the safety and comfort of our employees. We hereby definitively fix our roots in the Sonoma county terroir.