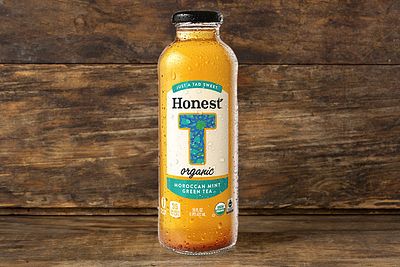 
For centuries, Moroccans have savored green tea with mint. Our recipe is sweetened with organic honey from the Brazilian rainforest. The result is a refreshingly subtle flavor and 35 calories for the whole bottle. If it's not organic, it's not Honest. Our tea is real-brewed, meaning our tea leaves are steeped in hot water like how you would at home, to create a delicious brew in which the true taste of the tea leaves comes through. We source our tea from Fair Trade Certified farms around the world. Learn more about our ingredients on our Source Map. When you choose Honest, you're choosing more than just a ready-to-drink tea. you're choosing to support yourself, your family, and your community.


Seth Goldman, co-founder of Honest Tea, drank a lot of liquids. An active person, Seth was continually in search of the perfect drink to quench his thirst after a run, a game of basketball, or between grad school classes. Yet, Seth found most drinks either too sweet or too tasteless.

Barry Nalebuff, Seth’s professor at the Yale School of Management, found that he and Seth shared a passion for the idea of a less sweet, but flavorful beverage during a class discussion of a Coke vs. Pepsi case study. They agreed that there were tons of sweet options and lots of watery drinks, but in 1994, there was nothing in between to fill the void.

Fast forward to 1997. Seth goes for a run in New York City with a college friend who used to concoct juice drinks with him after class. As they found themselves doing the same beverage mixing after the run, Seth knew then that if he was going to quench his thirst for good, he would have to create the drink himself. He e-mailed Barry to see if he was still excited about the idea.

Timing was everything. Barry had just returned from India where he had been analyzing the tea industry for a case study. Barry had even come up with a name to describe a bottled tea that was made with real tea leaves–Honest Tea. When Seth heard the name, the simmering idea began to boil–it was the perfect name for a brand that would strive to create honest relationships with its customers, suppliers and the environment.

Seth took a deep breath, quit his job at Calvert Mutual Funds, and started brewing batches of tea in his kitchen. Five weeks after taking the plunge, he brought thermoses of tea and a recycled bottle with a mock-up label to Fresh Fields (Whole Foods Market). The buyer ordered 15,000 bottles, and Seth and Barry were in business–if they could figure out how to make that much tea. They did, and we’re still at it 19 years later.